Moving on up… to the east side… to that dee-lux apartment, in the sky-eye-eye…

Z-ster graduated from the infant room to the toddler room at daycare this week. It was a moderately traumatic event for a day or so, as he went from biggest fish in the small pond status to little, little fish, getting eaten by the big, big fish.

(Okay… what does that last metaphor have to do with the subject line? Ten extra credit points to the first one to make the connection.)

For most of the last four months, Z’s been the biggest kid in the room, surrounded by kids who can’t talk and don’t walk nearly as well as he does. As a result, most of his interaction has been with the adults, with the folks supervising the room. They all love him, and he loves them right back, but we’ve been pushing to get him moved up so he can play with kids his speed.

They finally made room for him in the bigger kid room, so he packed up his things and moved on up. What we didn’t realize, though, was that now Z was the littlest guy in the room. Not a big deal, I though, since he’s a tough guy who can take care of himself.

The teachers in the new room had prepared the rest of the class, so everyone knew his name and was ready to welcome him. Sounds good, right? Well, the way it played out was, Z walked in the door, and a dozen bigger kids surrounded him, calling out his name over and over. So instead of the welcoming greeting they had intended, it felt more like Night of the Living Dead, with a room full of zombies chanting as they formed a circle around their victim-to-be.

He got over that in a day or so, though, and now he loves his new room. The kids are more mobile and active and can keep up with our little bugger. He’s the smallest kid in the room, but he’s the best climber and pretty quick out on the playground where there’s a race to a ball.

Chowing down on Pappy’s almond-blueberry pancakes. 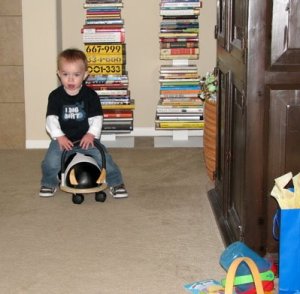 Four wheels and two legs are okay, but when will I get something motorized? 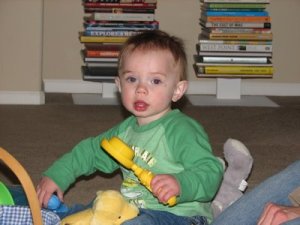 Can’t wait to start digging outside.

Dad to two amazing girls, husband to one.
View all posts by SAO' →
This entry was posted in day care, school, toddlers. Bookmark the permalink.

1 Response to Moving on up… to the east side… to that dee-lux apartment, in the sky-eye-eye…