This isn’t quite a non-recipe, in the sense that you can pretty much substitute anything you want in any quantity and it’ll still turn out basically the same.

But it is a highly negotiable one, with a lot of options in the meat vs vegan, bean, and chile departments.

Chupacabra might be a bit hard to find in your local grocer’s meat department, since one has never actually been caught, at least as far as the USDA and FDA know. But I think the combination of shredded chicken with two cups of Dynamite chile peppers tastes about the same.

(Truth in lending here: I have no idea what a Dynamite chile pepper is. That’s all they had left at this little mom and pop farmer’s market I just found. Looks like an Anaheim, but I’m assuming from the name it’s a wee bit hotter. Yeah, I know … I was born at night, but not last night … didn’t just fall off the tuna truck, ya know.)

The basic recipe goes like this: shredded chicken plus beans plus a veggie combo of onions and chiles with or without tomatoes plus broth equals soup. 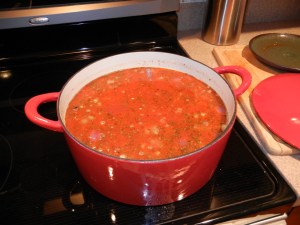 Chicken: One rotisserie chicken, or a smallish over-roasted bird, or a pound or so of grilled chicken (shredded), or a pound or so of boiled chicken (again, then shredded) with maybe a pound of ground turkey, browned.
Olive oil as needed
Two small-to-medium onions, yellow or sweet (I like sweet mixed with chiles, but that’s just me), medium to fine dice
3-4 garlic cloves, finely diced or minced
½ to 2 cups chile peppers (depending on your own personal taste and constitution), roasted, peeled, and diced (or, about 14-15 ounces of canned Hatch chiles)
2 cans black beans or 1 can black, 1 can pinto, rinsed
1 Tbs quality chile powder (Savory Spices is a great place to start, or grind your own.)
1 tsp cumin
2 tsp to 1 Tbs Mexican oregano
3 cups chicken broth plus more water if needed

First, get your meat ready, either from a rotisserie chicken or by grilling or boiling chicken breasts. If you boil the chicken, then save the water for your chicken broth.

If you’re using ground turkey or chicken, brown it in a large stock pot or Dutch oven. If you want, spice the meat with a little chile powder and cumin. Remove and set aside, then sauté the onions in the same pot, using the remaining fat from the meat plus as much olive oil as you need to keep the onions for sticking. Go with about medium heat for 6-7 minutes, and then add the garlic and chiles. Stir gently but frequently. If you have burnt bits on the bottom of your pot, lightly deglaze with a few Tbs of chicken broth (or a splash of wine or beer, if you happen to have some open).

Update: I love this technique of thickening the soup with a corn starch slurry at Edible Mosaic.

The key to this soup is managing your chiles. Too many of a too hot variety and you have jet fuel. Too few of a too mild, and you have nursing home cafeteria soup.

Dad to two amazing girls, husband to one.
View all posts by SAO' →
This entry was posted in chiles, Mexican, quick, soup, soup and stew, southwest. Bookmark the permalink.