I’m sure it’s just a coincidence, but lately I’ve been stumbling onto these “quick and easy” dinner ideas that are anything but. They promise 20 minutes of hands-on and 30 in the oven, and two hours later you’re still clarifying butter or waiting on something to rise, other than your temper.

But I have to highly recommend just about everything in the “Fast” section of Food and Wine’s Premier Wine Issue, which came out as a free trial when their iPad app first hit the streets. (It’s no longer free, which can be a pain for folks who already subscribe, but it’s still worth keeping your eyes on this app, as current issues have been priced at a reasonable $1.99.) 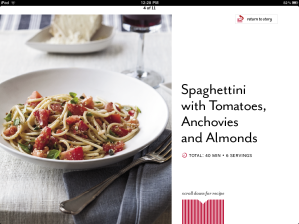 We’re working our way down the list, and so far everything has been just as quick and easy as advertised. Even better, they’ve been delicious. If it says 40 minutes, you’ll get it done in 39 or less. 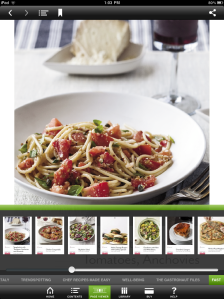 Combine the tomatoes, basil, scallions, olive oil, and red pepper in a large bowl. Season with salt and pepper, and let them stand at room temperature while you make everything else.

In a medium-sized food processor, pulse the almonds and anchovies until uniformly chopped. Add the cheese and capers and pulse a few more times.

When the pasta is al dente, drain and then return to the warm pot. Add the almond/anchovie mix and stir gently until the pasta is evenly coated. Then add the tomato mix and toss. Serve with a little extra pecorino cheese.

Dad to two amazing girls, husband to one.
View all posts by SAO' →
This entry was posted in pasta, tomato, web links. Bookmark the permalink.

9 Responses to My new favorite pasta